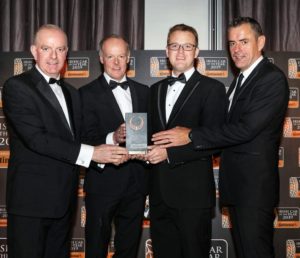 The SEAT Arona has been named Best Small Crossover of the Year at the 2019 Irish Car of the Year awards, in association with Continental Tyres.

SEAT’s smart new crossover features a range of customisable features as well as Full Link Technology and features including Wireless Charger and Keyless System. The Arona is also equipped with safety features including ACC with Front Assist, a total of 6 airbags, Blind Spot Detection and Rear Traffic Alert.

The victorious SEAT Arona beat off stiff competition in the category including the Citroen C3 Aircross, Ford EcoSport, Hyundai Kona and VW T-ROC.

The award for Small Crossover of the Year was presented at this evening’s Irish Car of the Year awards, which took place at the Gibson Hotel, Dublin.